The weeks have been flying by, as they tend to do when the weather is glorious and the air is redolent of flowers. Even Fiesta Island Dog Park has gone super-bloom-y!

This is the Least Tern nesting area that is open to frolicking doggos when it’s not nesting season. They mowed most of the island under for fire safety reasons (also tumbling tumbleweeds), but let the flowers run rampant in this section of the park. You can’t tell from this angle, but there are loads of happy dogs running through hidden paths! 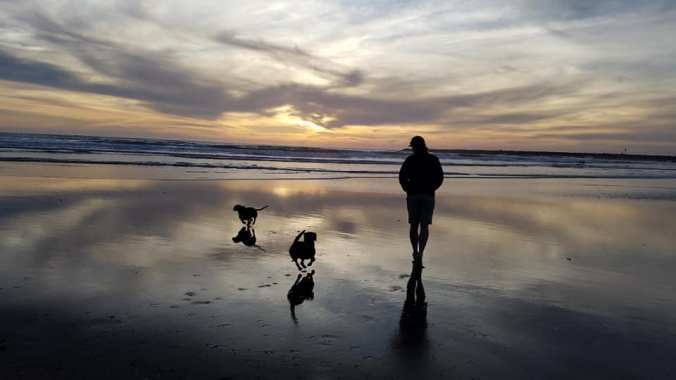 I do love the Spring!

I’ve been a busy lil’ bee of late, between last month’s collaboration concerts between SACRA/PROFANA and The LA Choral Lab, which were deeply moving and an absolute thrill, and Master Chorale’s performances of Puccini’s rarely-performed “Messa di Gloria” with the San Diego Symphony. Unfortunately, our conductor, Speranza Scappucci, had to withdraw due to a back injury, but Courtney Lewis ably filled in for her, and the performances were, if I may say so myself, magnificent. But you don’t have to take my work for it, since Ken Herman of San Diego Story reviewed us and called the Puccini a “rewarding surprise!”

The outer sections of the Kyrie found the Master Chorale spinning out Puccini’s gentle, beautifully shaped themes of petition with a warm, ingratiating sonority, adding just the right amount of brilliance and ardor for the center section… In Puccini’s exuberant “Et resurrexit” and “Et vitam venturi,” the Master Chorale flexed its ample musical muscle, displaying vibrant and astutely balanced fortes that testified to the superb work behind the scene of its Music Director John K. Russell.

Woo hoo!! And speaking of fantastic reviews, I was delighted to find out that the awesome review blog Compulsive Reader reviewed my book, and I could not have asked for a more thoughtful, spectacular review!

Libby Weber had a bold idea. She decided to write a sonnet, one sonnet, each day for an entire year… Delightfully so, this turns out to have been an undertaking Libby Weber pulls off with grace and aplomb. The result of her bold experiment in poetry is a lovely, thick book of sonnets that vary in mood, topic…  Naturally, in an ordered daily ritual of writing a sonnet, some poems will shine more than others. Yet, the collection as a whole is vivid, insightful, fun, and engaging. Libby Weber is obviously an intelligent, well-educated woman with insights worth noting, and she shares her knowledge, wit, talents, and foibles with readers in an act of generosity. That Libby Weber would attempt the feat of sonnet a day alone is worth praise. Her success in meeting her goal and producing such an pleasing anthology should be strongly applauded.

This may be confirmed by Beloved Spouse, who was asleep when I got the link to the review but wasn’t for long after I started reading.

We’re approaching book awards season, and though RISK A VERSE: A Year in Daily Sonnets is up for a number of them, my hopes are thoroughly tempered on that front because I know all too well that it’s hard to convince people that an enormous book of sonnets is worth their time. But this review from Compulsive Reader is so wonderful to me because it nails why I wrote the book to begin with: to share stuff I think is fun and/or cool with other readers. And this reader appears to have had a great time with the book, and I am so happy and grateful!

In other news, I’m singing on an all-Handel recital tomorrow evening with the other section leaders at All Souls’ Episcopal to benefit the church’s Capital Campaign to make needed renovations. There’s no admission, but a freewill offering will be taken. Plus an anonymous donor is matching all Capital Campaign donations for the month of April, which will double whatever we’re able to raise! Looking forward to making lovely music with people I adore, and for an excellent cause!

And last but not least, I wrapped up serving on a jury yesterday. This was my second jury experience, but my first civil case. I’m filled with gratitude to my fellow jurors for their engagement, thoroughness, and care wading through the questions we were asked to answer. Even though deliberations were sometimes intense, we were respectful of one another’s experiences and opinions, and any stress we felt was because we all wanted to be fair and took our responsibility to the legal process seriously, and that’s a good thing. And I also fell in with the other jokester on the jury, so there was laughter amidst the debate. And our foreperson brought donuts on the last day of deliberations! Best of all, the judge also let us act in an advisory capacity in addition to answering the strict panel of questions and figuring out damages, which I didn’t even know juries could do. So that was awesome and interesting! And I think that the jury walked out of the courtroom confident that justice had been done, and that’s a pretty awesome feeling.

I and several other jurors were also joking about writing books about this trial, so be forewarned. Heh heh heh.

PS Thanks to my awesome comics pro friend, I miiiiiiight be going to Comic-Con this year!